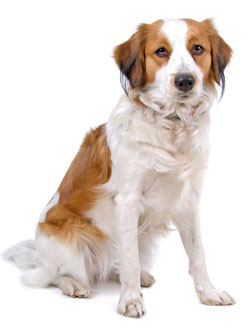 
The Kooikerhondje or Kooiker Hound, is a small spaniel-type breed of dog of Dutch ancestry that was originally used as a working dog, particularly in duck hunting. Kooikers were popular in the 17th and 18th century and appeared in the paintings of Rembrandt and Jan Steen.

These dogs are around 35 - 40 cm in height with a nearly square body that is slightly longer than their height at the shoulders. They have long, hanging ears with wispy tips that are set close to the head and upright, feathered tails. For showing, black ear tips and white tails are preferred.

They have multicoloured coats, often predominantly white and chestnut. The fur is medium long and either slightly wavy or straight. The breed has a waterproof coat that does not require clipping, with a well-developed undercoat.

Kooikers are intelligent, alert, agile dogs, generally with a benevolent nature. However, they can be extremely territorial and will bark at strangers. They are usually good swimmers and can generally adapt to different levels of exercise.

After earlier popularity as a hunting dog, the breed almost became extinct after World War II until Baroness van Hardenbroek van Ammerstol rescued it. The breed was only officially recognised by the Dutch Kennel Club in 1971 and has since been imported into other countries and recognised officially although the breed is still relatively unknown in North America and not yet recognised as a breed in America or Canada.

Kooikers have good appetites and a tendency to put on weight easily.