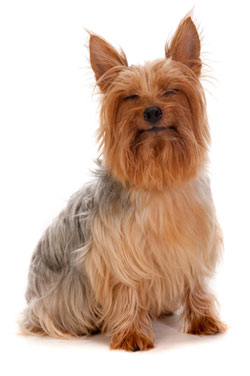 
The origins of this breed lie in the united kingdom and it is believed to be a cross between an Australian terrier and a Yorkshire Terrier. Breed as a dog for small houses, but still capable of rodent hunting.

Although his long, fine, glossy coat gives him a rather glamorous appearance - don’t be fooled as this quick smart dog is mindful of his territory. Curious and attentive, the silky terrier is an enthusiastic digger. This docile breed makes a good watchdog and an excellent travelling companion.

The silky terrier does well living in an flats and apartment, but it has excellent stamina and loves to play outside.