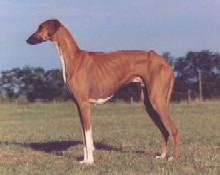 
The standards call for a hound from 33 to 55 pounds (15 to 25 kg); its height is 24 to 29 inches (61 to 74 cm). The coat is very short and almost absent on the belly. Its bone structure shows clearly through the skin and musculature. Its muscles are "dry", meaning that they lie quite flat, unlike the Greyhound and Whippet. In this respect it is similar in type to the Saluki.

In Africa, Azawakh are found in a variety of colours such as red, blue fawn (that is, with a lilac cast), grizzle, and, rarely, blue and black. The Azawakh in its native land also comes with various white markings including Irish marked (white collar) and particolour (mostly white). Because of this wide colour variation in the native population, the American standard used by the AKC and UKC allows any colour combination found in Africa. In the United States, the FCI standard is modified to have no colour restrictions at a minimum and there is a strong sentiment that the FCI standard should be heavily edited or replaced.

Colours permitted by the FCI breed standard are clear sand to dark fawn/brown, red and brindle (with or without a dark mask), with white bib, tail tip, and white on all feet (which can be tips of toes to high stockings). Currently, white stockings that go above the elbow joint are considered disqualifying features in France, as is a white collar or half collar (Irish marked).

Azawakh have no known incidence of hip dysplasia. There is a small occurrence of adult-onset idiopathic epilepsy in the breed. Wobbler disease or cervical vertebral instability does rarely occur. Some breeders believe this is largely a developmental problem where puppies grow too quickly due to a high-protein western diet.

Like the Basenji and Tibetan Mastiff, the Azawakh bitch often has a single annual estrus. Unassisted birth of healthy puppies is the norm. Litter sizes are usually from 4 to 6 puppies but litters as small as 1 and as large as 8 occur.

Azawakh need a fairly high level of exercise and should have regular runs off lead in large enclosed areas to run off steam. The dogs are very social and emotional. They need a master that provides firm but fair leadership. Azawakh thrive on companionship of other Azawakh. Unlike other sighthounds, the primary function of the Azawakh in its native land is that of protector. It develops an intense bond with his owner, yet can perform independently from its master. With those they accept, Azawakh are gentle and extremely affectionate. With strangers many are reserved and prefer not to be touched, but are not inherently aggressive. Although raised to protect livestock, they do not have innate aggression toward canine nor human unless they are threatened.