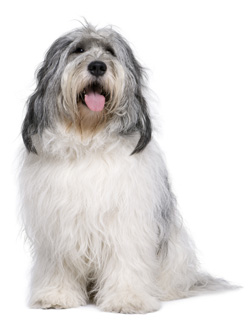 
Believed to have its origins in central Asia, on the high plateaus of Tibet, Mongolia and the Gobi desert, possibly descending from Tibetan Mastiffs, Tibetan Terriers, Tibetan Spaniels, Lhasa Apso and so on.

These versatile lowland herders needed to be robust, tough, harsh coated, highly intelligent, agile and fearless. As well as herding, they were expected to be ready to face wolves who wandered to close.

In the story by the Polish merchant, one Kazimierz Grabski, who came to Scotland in 1514 with a cargo of grain to exchange for some Scottish sheep. Scottish shepherds were so impressed with the Polish Sheepdog they purchased three from him. Many believe that these dogs contributed the the development is Scottish sheepdogs in general, including the Bearded Collie.