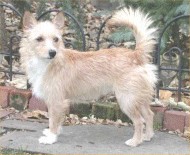 
The Portuguese Podengo is an ancient multi-sensory hound (sight and scent) breed of dog from Portugal. The Podengo comes in three sizes that are not interbred - small (Pequeno), medium (Medio) and large (Grande), each size with two hair coats (smooth and wire coat) and its own unique temperament. All three sizes love to hunt, its tradition in their native country. Typically, the dogs hunt in a pack with their human companion following them on large tracts of land with lots of game. Their hunting style is of an independent nature, with the dog(s) forging ahead with the hunter within their site range (which can be many acres). When game is found, they will kill it and bring it back to the hunter or wait for the hunter to catch up and shoot it. Each is capable of hunting game that is appropriate to their size and temperament.