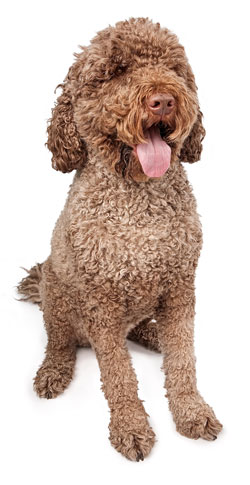 
Portuguese Water Dogs are a breed of dog, bred by the Portuguese to be companions at sea. They are similar in size to a small spaniel and are usually completely black.

Portuguese Water Dogs (Porties) were originally used by the fisherman of Portugal. They helped to bring in nets and to save fishermen when they fell in the water. They were very popular, and this might be where they picked up their loyal and dependable characteristics. Eventually commercial fishing equipment made the dogs unnecessary. They fell out of favour and almost became extinct. At one point, there were only 25 Portuguese Water Dogs in the world. Since then, breeders have been carefully bringing back the breed. There are now thousands of Porties throughout the world.

The fur is either worn in a "retriever cut" or a "lion clip." The lion clip is long all over the body, except for the hindquarters, muzzle, and the base of the tail. This cut originated with the fishing dogs of Portugal to keep the body warm while allowing movement. The end of the tail is kept long, because in those days, the fishermen sometimes didn't know how to swim, and the dog could pull them to safety with its tail. The retriever cut is long all over the body (although some owners prefer the muzzle or the base of the tail shorter). This cut is a more recent style and makes the dog look a bit like a Poodle.

Most dogs, especially traditional and show dogs, are entirely black or a dark brown; however, interbreeding has resulted in dogs with white patches, or white and brown coats. The fur is either wavy or curly, and is like human hair (and Poodle hair) in that it keeps growing. The fur must be trimmed about every two months, and although it is possible to groom at home, it is usually easier to pay a professional groomer.

The dogs also have an interesting bluish tinge to their skin that is hard to notice underneath their fur. Their paws are slightly webbed, which one can see by trying to pass one's finger between the dog's toes.