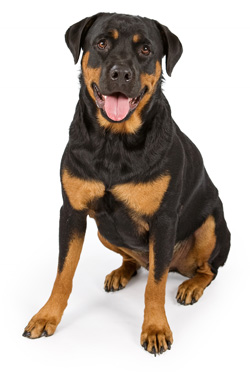 
A Rottweiler is a medium large, robust and powerful dog breed, black with clearly defined tan markings on the cheeks, muzzle, chest and legs as well as the eyebrows. The breed is an ancient one and its history stretches back to the Roman Empire. In those times the legions travelled with their meat on the hoof and required the assistance of working dogs to herd the cattle. One of the routes the army travelled was through Württemberg and on to the small market town of Rottweil.

This region eventually became an important cattle area and the descendants of the Roman cattle dogs proved their worth in both droving and protecting the cattlemen from robbers. It would be a brave villain who would try and remove the purse around the neck of a Rottweiler Metzgerhund (Butcher's Dog of Rottweil).

However, by the end of the 18th Century the breed had declined so much that in 1900 there was only one female to be found in the town of Rottweil. But the build up to the First World War saw a great demand for "police dogs" and that led to a revival in interest for the Rottweiler. Its enormous strength, its intelligence, and its ability to take orders made it a natural weapon of war.

From that time it has become popular with dog owners and in 1935 the breed was officially recognised by the American Kennel Club. In 1936 Rottweilers were exhibited in Britain at Crufts. In 1966 a separate register was opened for the breed.

In recent years, the breed has received a lot of bad press. Unscrupulous breeders have produced dogs with highly aggressive tendencies and some owners have used the dogs to boost their macho images. A well-trained and responsive "Rottie" can provide the right owner with a great deal of exercise and loving companionship.