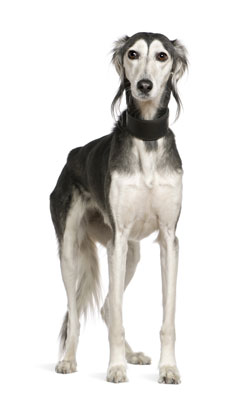 
The Saluki is a member of the sight hound family, that is, hounds that hunt by sight rather than scent. The saluki is one of the oldest breeds known today, and originally came from the Middle East, where it was used (and is still used to some extent) by the Bedouins for hunting hare and gazelle. Recent DNA analysis confirms the age of the breed

One of the oldest known breeds of dogs, which has existed virtually unchanged for many thousands of years, the Saluki was known by the Arabs as El Hor - the Noble One. Used for coursing gazelle, fox and hare, the aristocratic Saluki was held in such high esteem that he was never sold, only given away and then only to extremely worthy recipients. He was permitted to enjoy the choicest titbits from the plate and the finest linen from the bed and even declared to be a sacred animal.

A gentle, dignified dog, the Saluki is somewhat aloof at first and does not quickly take to strangers. But once he attaches himself to a person, he does so for life. Affectionate without being overly demonstrative, the Saluki is nevertheless extremely devoted to his owner and family.

His beauty is that of the thoroughbred horse, displaying extreme grace and symmetry in his clean-cut lines. There are two varieties of Saluki which are similar in all respects except for the fact that the Smooth variety carries no feathering.