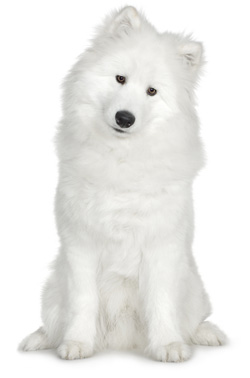 
The Samoyed dog (pronounced with the accent on the first or second syllable) is named after the obsolete name, Samoyed, of Nenets people of Siberia, who were nomadic reindeer herders who bred the fluffy, white, smiling dogs to help with the herding, to pull sleds when they moved, and to keep them warm at night by sleeping on top of them. The Samoyed name quickly become obsolete (perceived as derogatory, see Nenets article) after the Russian Revolution, but by then Arctic explorers had brought enough of the Samoyed dogs back to Europe to keep the name and establish the breed there and in the U.S. The breed is often nicknamed "The Smiley Dog" because they usually have a permanent smiling look that appears they are pleased to see everyone.

The dogs are still sled pullers (most famously in the Iditarod) but are seldom used for herding anymore, and they are too friendly to be good watch dogs -- they are as likely to lick a burglar's face as to scare him off on purpose (although 50 or 60 pounds of strange dog lunging for his face often has that effect), but there is no better dog to have around small children or even other dogs.

Laika, the first living creature launched into orbit, was a terrier mixed with Samoyed.