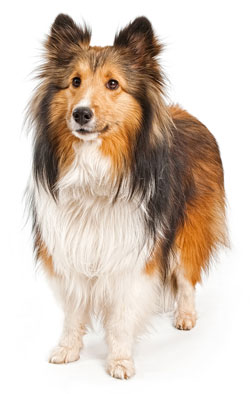 
The Shetland Sheepdog, often known as the Sheltie, is a breed of herding dog.

Shelties have the herding dog temperament. They are vocal, excitable, energetic dogs who are always willing to please and work hard. They are partly derived from dogs used in Shetland for herding and protecting sheep.

They are small to medium dogs, and they come in a variety of colours, such as sable/white, tricolour, and blue merle.

Their early history is not well-known. They were originally a small mixed-breed dog, often 8–10 inches (200–250 mm) in height. It is thought that the original Shetland herding dogs were of Spitz type, and these were crossed with collie-type sheepdogs from mainland Britain. In the early 20th century, James Loggie added a small show Rough Collie to the stock, and the modern Shetland sheepdog was established. The original name of the breed was 'Shetland Collie', but this caused controversy among Rough Collie breeders, and the breed's formal name was changed to Shetland Sheepdog.

The breed was recognised by the Kennel Club in 1909.