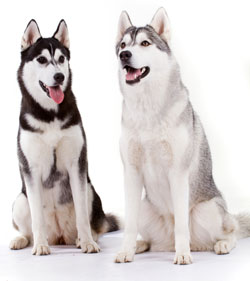 Siberians have a dense double coat that comes in a variety of colours and patterns, usually with white feet and legs, facial markings, and tail tip. The most common colours are black and white, grey and white, copper red and white, and pure white, though many individuals have brown, reddish, or biscuit shadings and some are piebald spotted. Striking masks, spectacles, and other facial markings occur in wide variety.

Their eyes are brown, hazel, or blue. The light blue eye colour is characteristic but incompletely dominant; Siberians may have one eye brown or hazel and the other blue, or may have blue and another colour mixed in the iris of one or both eyes. This might be the only breed for which different-coloured eyes are allowed in the show ring.

Its ears are triangular, well-furred, and erect; its fox-brush tail is carried in a sickle curve over the back. It is a fairly active and energetic breed with a friendly and gentle temperament. Popular now as a family pet and a show-dog, the Siberian is no longer as much used as a sled dog as formerly and has been largely replaced in dogsled racing by crossbreds.

The Siberian Husky is widely believed to have originated exclusively with the Coastal Chukchi tribes of the east-Siberian peninsula. There is evidence, however, that Siberian dogs were also imported from the Koryak and Kamchadal tribes. Recent DNA analysis confirms that this is one of the oldest breeds of dog. Dogs from the Anadyr River and surrounding regions were imported into Alaska from 1908 (and for the next two decades) during the gold rush for use as sled dogs, especially in the All-Alaska Sweepstakes, a 408-mile distance dogsled race from Nome to Candle and back. Smaller, faster and more enduring than the 100-120 pound freighting dogs then in general use, they immediately dominated the Nome Sweepstakes.

Leonhard Seppala, a Norwegian fisherman turned gold miner, became involved with Siberian dogs when he was asked by his employer to train a group of females and pups for the 1914 Nome Sweepstakes. After a poor start his first year, Seppala dominated the races thereafter. In 1925 he was a key figure in the dogsled delivery of diphtheria serum from Nenana to the city of Nome, Alaska, stricken by an epidemic. The Iditarod trail race commemorates this famous delivery. The following year two groups of Seppala’s dogs toured the USA, starting a mania for sled dogs and dogsled racing, particularly in the New England states.

In 1930 the last Siberians were exported as the Soviet government closed the borders of Siberia to external trade. The same year saw recognition of the Siberian Husky by the American Kennel Club. Nine years later the breed was first registered in Canada. Today’s registered Siberian Huskies are largely the descendants of the 1930 Siberia imports and of Leonhard Seppala’s dogs.

Siberians are still used for dogsled racing but are seldom competitive with Alaskan husky and hound-type crossbreds that are specially bred and selected for speed and have less heavy coats. They are still quite popular in races restricted to purebreds and are faster than other pure sled dogs breeds such as the Samoyed and Alaskan Malamute. Today the breed tends to divide along lines of racing Siberians versus show Siberians.

Apart from dogsled racing, they are very popular for recreational mushing and are also used for skijoring (one to three dogs pulling a skier) and European ski-pulka. A few owners use them for dog-packing and hiking. They have also seen use as therapy dogs.

Popular as family pets due to their striking appearance and gentle temperament, Siberians have certain drawbacks. Although normally quite tractable, affectionate and docile with people, they have a strong hunting drive and will kill cats, rabbits, chickens, squirrels and other birds and small animals; they have been known to savage sheep.