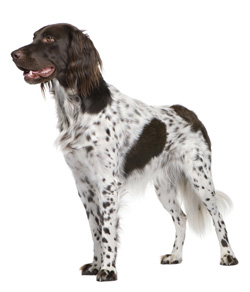 
The Small Munsterlander (SM) (or Kleiner M■nsterlðnder) is a versatile hunting-pointing-retrieving dog breed that reached its current form in the area around M■nster, Germany. The Large Munsterlander is from the same area, but was developed from different breeding stock and is not related as the names would suggest. Small Munsterlanders bear a resemblance to both spaniels and setters but are rather more versatile while hunting on land and water.

Originally a dog bred to work with noble families falconers before guns were used in bird and small game hunting, ancestors of the Small Munsterlander had to work in upland areas to flush prey for the falcon, then allow the falcon to keep the prey until the falconer could retrieve it while the dog pointed at the catch. To this day the Small Munsterlander has excellent close searching and pointing drive. With wider availability of guns and personal time for commoners, hunting became more popular, and the breed was further developed as a retriever that worked equally well in the field and water. Owners of the breed consider it to be uniquely effective in working as a team with the huntsman in all phases of the hunt, akin to the close cooperation between a sheep herder and Border Collie.

By the 1800s the breed had fallen into obscurity. Small Munsterlanders were little known, kept by a few families on farms around Munster. For a half century the few dogs that were bred were primarily companions, and used when hunting to feed the family rather than for sport. It developed a local reputation as the dog to have when a hunter's success or failure determined whether his family would have enough to eat. At the end of the 19th century, a concerted effort was made to re-establish the breed from the remaining lines in the Munster region. The fortunate outcome of the companion phase in the Small Munsterlander history was its excellent in-home personality.

The Small Munsterlander is a rare breed in the United States, numbering perhaps in the low thousands, and demand from hunters outstrips the number of available dogs, so breeders typically give preference to hunters. They're especially hard to come by for nonhunters there. They are more numerous in Germany, the Netherlands, and the Czech Republic.

In the United Kingdom, the breed is rarer still. Recognised by The Kennel Club as an imported breed in 2006, they are still to be established in the hunting community.

Other names for this breed: Spion in Germany; and Heidewachtel in the Netherlands.