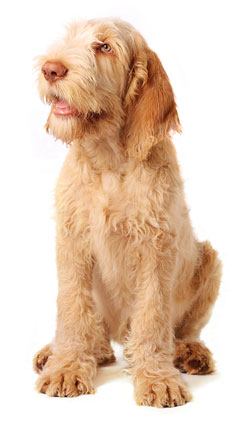 
The Spinone Italiano is an Italian dog breed. However, it should be recognized that the Spinone is a unique, indivisable breed and the correct reference is Spinone (plural, Spinoni). It was originally bred as a versatile gun dog. To this day, the breed still masters that purpose. The Spinone is a loyal, friendly and alert dog with a close lying, wiry coat. It is an ancient breed that can be traced back to approximately 500 BC.

It is traditionally used for hunting, pointing, and retrieving game (HPR), but, in addition to that purpose, the intelligent and strong Spinone may be practically anything ranging from a companion to an assistance dog.

The Spinone is easy going, docile, and affectionate towards both people and dogs. It is well known for being loving and gentle with children. Its extremely patient nature also helps with this, but children should be taught not to take advantage of this trait. It is loyal to those it knows and still friendly to those it does not. The breed is not known for any aggression and is therefore not a wise choice for somebody looking for an aggressive guard dog. Centuries of working with man as a hunting companion has created a loyal, intelligent dog that is easily trained, although some can be stubborn about performing a learned task if they see no point in it. Because they are sensitive, motivational training works best for this breed, as this gentle creature's feelings can easily be hurt when handled incorrectly.

The Spinone can be a very active breed, but it is not a racy dog like most other hunting breeds. The Spinone typically moves at the relaxed trot that is characteristic of the breed. It has often been called the perfect dog to run or jog with, because it will not run off in front and leave its human companion struggling to keep up as it prefers the slower pace itself.[citation needed] It can be more than happy in a small yard and does not necessarily need acres of land. The small garden combined with regular walks would suit a Spinone well.

The breed is believed to have been developed in the Piedmont region of Italy. As the Spinone is a very ancient breed (it is believed to be one of the oldest gun dogs in existence), it is not known exactly what the origins of the breed are; there are many different theories. Some of these claim that the Spinone could have originated in Italy, France, Spain, Russia, Greece, or Celtic Ireland.

Some people familiar with the history of the breed claim that the Spinone descended from the now-extinct Spanish Pointer, whilst others claim that it was the ancient Russian Setter that is responsible for the breed we know today. An even more popular theory is that Greek traders brought coarse-haired setters to Italy during the height of the Roman empire, where the dogs were then crossed with various others and the modern Spinone eventually emerged.

The French claim that the Spinone has descended from crosses of several French pointing breeds, whilst the Italians believe the Spinone is the ancestor of the Wirehaired Pointing Griffon, the German Wirehaired Pointer, and the Pudelpointer. Any one of these claims could be true; perhaps several of them are correct.

During the Second World War, the Spinone became close to extinct. Both the war and the fact that Italian hunters had begun using other breeds (such as setters, pointers, and spaniels) in the hunt, whereas before it was primarily the Spinone. Many breeders had to resort to crossing the Spinone with other wire-haired breeds, such as the Boulet, Wirehaired Pointing Griffon and German Wirehaired Pointer.

The breed was not officially known as "Spinone" until the early nineteenth century. Before then, some areas knew the breed as the "Spinoso". The breed may have been named after an Italian thorn bush, the spino, which was a favorite hiding place for small game because for larger animals it was practically impenetrable. Only thick-skinned, coarse-haired animals could fight through the branches unharmed to locate the game. The Spinone was the breed most capable of doing so, and, perhaps, therefore the