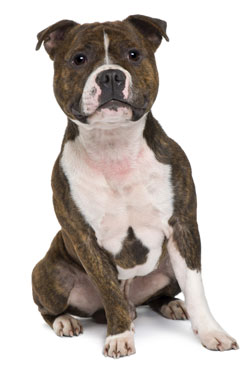 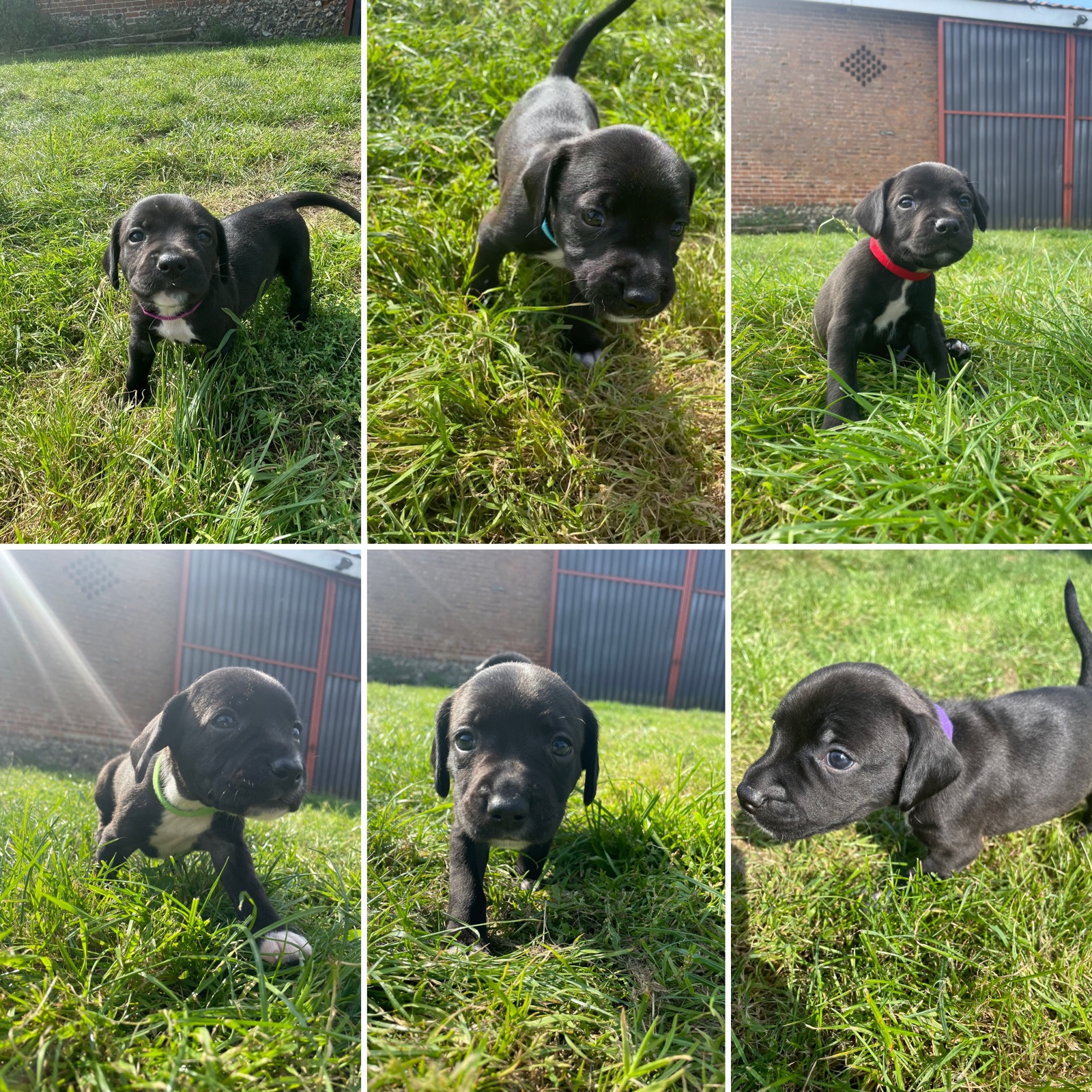 The Staffordshire Bull Terrier is a stocky, muscular dog with a broad head, thick neck, powerful jaws, relatively short snout and short floppy ears. The coat is uniformly short and may be coloured black, brindle, white or tan (a reddish tan).

The Stafford (Staffie or Staffy) is renowned for loyalty to their owners and stability of temperament, qualities which can make them a good family pet. When properly bred and socialised, they are fond of people, playful, energetic, and not naturally aggressive. They are normally excellent with children and their small size adds to their appeal as a family pet; however, they have extremely high energy, which makes them more than a handful for inexperienced owners.

The dogs origins as a fighting breed can make the Staffy prone to taking on any other dog that seeks to fight. For this reason, Staffords should not be brought into close contact with dogs that are aggressive or snappy towards other dogs. It is wise to avoid such confrontations, bearing in mind the strength and fearlessness of the Stafford. However, Staffords will play or co-habit happily with other dogs that are not aggressive.

In the mid-1800s, Terriers of all kinds were bred and used as pit fighting dogs. This "sport" was particularly localised in the Midlands with areas such as Darlaston, Birmingham, Walsall, and Stoke-on-Trent nurturing their own fighting breeds.

One such breed that eventuated from this era of fighting dogs was known as the Bull Terrier. The dog was originally bred to an improved form by a James Hinks of Birmingham. In 1888 the Bull Terrier standard was published by the Bull Terrier Club. The Bull Terrier eventually became popular as a family animal and gentleman's dog and even had its own breeders club in Birmingham. This, unfortunately, did not last long as most of the members never returned from the trenches of the First World War.

In the words of James Hinks II, "My father owned dogs of the bravest of the old breeds and had experimented in their breeding. He had also crossed in the white English Terrier and the Dalmatian. In this way he produced a pure-white dog which he called the Bull Terrier."

The idea was to develop a stylish gentleman's dog breed for its good looks. The "down face" snout was introduced later by a stud; this feature was later reverted in some lines of the breed.

The Staffordshire Bull Terrier has arisen from centuries of careful breeding to develop a strong dog that is placid towards people. It should not be confused with the pit bull, a breed of uncertain origins and unpredictable temperament.

Staffies can come in any solid colour except liver, and white with any colour spots (known as pied). Brindled coats and brindled spots are also allowed. Black and tan Staffies are sometimes seen but are considered an unacceptable colour.

The dogs stand 14 to 16 inches at the withers and weigh 24 to 38 pounds with bitches on the lighter side and male dogs on the heavier side.