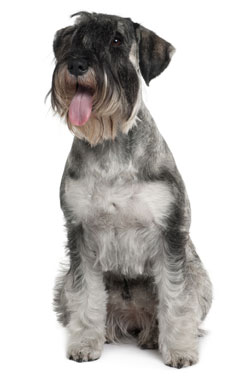 
The Standard Schnauzer is the original breed of the three breeds of Schnauzer, and despite its wiry coat and general appearance, is not related to the British terriers. Rather, its origins are in old herding and guard breeds of Europe. Generally classified as a working or utility dog, this versatile breed is a robust, squarely built, medium-sized dog with aristocratic bearing. It has been claimed that it was a popular subject of painters Sir Joshua Reynolds, Albrecht Dürer and Rembrandt, but actual proof remains elusive.

Standard Schnauzers are either salt-and-pepper or black in color, and are known for exhibiting many of the "ideal" traits of any breed. These include high intelligence, agility, alertness, reliability, strength and endurance. This breed of dog has been very popular in Europe, specifically Germany where it originated.

The breed was first exhibited at a show in Hanover in 1879, and since then have taken top honors in many shows including the prestigious "Best in Show at Westminster Kennel Club" in the United States in 1997.

In the Middle Ages, schnauzer-type dogs of medium size were developed from herding, ratting and guardian breeds in Western Europe. A dog of the peasant farmer for centuries, with the advent of dog showing in the 19th century they finally captured the interest of German dog fanciers, who began to standardize their look and temperament for the show ring.

In modern history, the Standard Schnauzer has taken on a variety of roles. The Red Cross used the dogs for guard duty during World War I. Both German and (in one documented instance) American police departments have put the dogs to work as well. Several Standard Schnauzers have been used in the USA for drug and bomb detection, and also as search-and-rescue dogs.