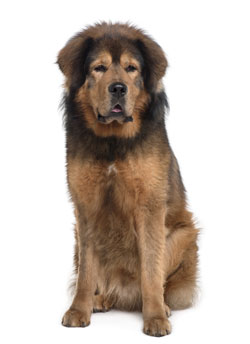 
This is an ancient breed, descended from very early large Tibetan dogs from which most, if not all, of today's Mastiff-type and Molossuses are descended. Some of the modern breeds thought to have Tibetan Mastiff ancestry include the Leonberger, the Newfoundland, the Kuvasz, and even the toy dog breed, the Pug, which itself was a well-established breed before the 1500s. Marco Polo encountered the large Tibetan dogs in his travels and described them as "tall as a donkey with a voice as powerful as that of a lion." They were used as guard dogs outside the sacred city of Lhasa.

The breed originated in Tibet as a herding dog and guard dog and it still makes an excellent sheepdog, but, by the early 19th century, this dog had become nearly extinct in its homeland. English breeders took an interest in it and developed the Tibetan Mastiff in their own country during the first half of the 19th century. King George IV owned a pair, and there were enough of the breed in England in 1906 to be shown at the 1906 Crystal Palace show. Subsequently, however, the breed lost favour and nearly died out in England, as well.

Today there are many active breeders, although the breed is still uncommon. The breed has suffered from inbreeding over many generations because of the small number of the original stock, but today's reputable breeders work hard at reducing the genetic problems.

The native strain of dog, which still exists in Tibet, although rarely, and the English breed are very different in temperament. Elizabeth Schuler states, "The few individuals that remain in Tibet are ferocious and aggressive, unpredictable in their behaviour, and very difficult to train. But the dogs bred by the English are obedient and attached to their masters."

As a sheepdog and guard dog, it is ferocious in its ability to tackle even wolves and leopards. As a domestic dog, it requires at least a yard; it is not an appropriate dog for an apartment. Still, the modern English breed is generally easy-going although mildly aloof around strangers. Through hundreds of years as a guard dog, the breed has developed a tendency to bark at sounds during the night, so leaving it outside at night with nearby neighbors is not usually recommended. The Tibetan Mastiff is usually good with children in a family home.

Like most herding breeds, they are intelligent and learn quickly. Obedience training is imperative, since this is also a strong-willed dog with powerful jaws, strong muscles, and a tremendous body. Socialization is also critical with this breed because of their natural caution around strangers and guarding instincts.

The Tibetan Mastiff is among the largest breeds. Its sturdy bone structure and large, wide head makes it appear considerably more massive than other dogs of a similar height. It can reach heights up to 31 inches (80 cm) at the withers, although the standard English breed is typically in the 25 to 28 inch (61 to 71 cm) range. The largest of the breed weighs nearly 220 pounds (100 kg), but the English standard dogs are more typically between 140 to 180 pounds (64-82 kg). Its double coat is long and usually all black, although it can also have areas of tan or gold, and coat colours of Gray, gold, and brown are also possible.

Unlike many other Mastiffs, it has a smooth rather than wrinkled brow and lacks their large jowls.

Like most very large breeds, its life expectancy is relatively short, usually not more than 10 or 11 years. The breed has a higher incidence than normal of hypothyroidism, entropion or ectropion, skin problems including allergies, missing teeth, maloclusion (overbite or underbite), cardiac problems, progressive retina atrophy (PRA), and small ear canals with a tendency for infection. As do most giant breeds, some suffer from elbow or hip dysplasia, although this has not been a major problem in the Tibetan Mastiff.