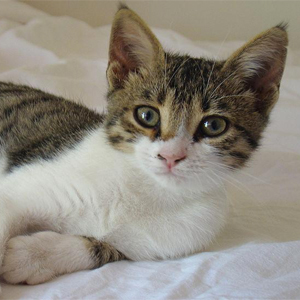 
The Aegean cat is a naturally occurring breed of cat originating from the Cycladic Islands of Greece. Development of this breed started in the early 1990s by breeders in the fledgling Greek Cat Fancy. It is considered to be the only native Greek breed of cat.

The Aegean Cat originates from the Cycladic Islands in the Aegean Sea, where they occur naturally. Since it is one of the newest cat breeds, it is believed that it could be among the rarest; however, they seem to be ubiquitous throughout Greece. They are much liked for their character and intelligence. In rural areas, they are often seen as the best method of pest control, because they are very capable predators.

Although the Aegean Cat has only very recently begun to be bred systematically, has been domesticated for many centuries and thus has become adapted very well to humans. It is a social pet that tolerates living in an apartment rather well. It is intelligent, active and lively and also communicative, not hesitating to draw a person's attention.

The coat of an Aegean Cat is semi-longhaired, without down hair, with a moderate ruff and a rich tail. The Aegean Cat's coat provides good protection during the harsh winter weather and sheds out short for the summer. The coat is bicolour or tricolour; one of the colours is always white, without signs of yellowing and takes up between 1/3 to 2/3 of the body. Other colours can be black, red, blue, cream, with or without stripes. The Aegean Cat is a medium-size breed, with a sturdy and muscular build, without signs of obesity. The body is long, with strong, medium-size feet and round-shaped paws. The tail is moderately long, straight, without kinks. The head is medium-size, wide but not round. The ears have a wide base and rounded tips and are covered by hairs. The eyes have an oriental shape and their colour can be any shade of green.