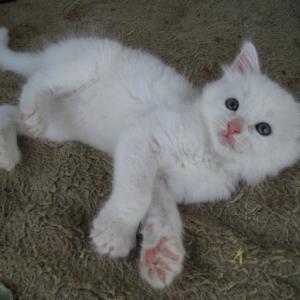 
A polydactyl cat is a cat with a congenital physical anomaly called polydactyly (or polydactylism, also known as hyperdactyly), a type of cat body type genetic mutation, that caused the cat to be born with more than the usual number of toes on one or more of its paws. Cats with this genetically inherited trait are most commonly found along the East Coast of the United States, and in South West England and Wales.

Two specific breeds recognised by some but not all cat fancier clubs are the American Polydactyl and Maine Coon Polydactyl, and named regional populations include the Boston thumb cat, Cardi-cat, Ithacat, and Vermont snowshoe cat.

The condition seems to be most commonly found in cats along the East Coast of the United States and in South West England and Wales. Polydactyl cats have been extremely popular as ship's cats. Although there is some controversy over whether the most common variant of the trait originated as a mutation in New England or was brought there from Britain, there seems to be agreement that it spread widely as a result of cats carried on ships originating in Boston, Massachusetts, and the prevalence of polydactyly among the cat population of various ports correlates with the dates when they first established trade with Boston. Contributing to the spread of polydactyl cats by this means, sailors were long-known to especially value polydactyl cats for their extraordinary climbing and hunting abilities as an aid in controlling shipboard rodents. Some sailors also considered them to be extremely good luck when at sea.

Nobel Prize-winning author Ernest Hemingway was one of the more famous lovers of polydactyl cats, after being first given a six-toed cat by a ship's captain. Upon Hemingway's death in 1961, his former home in Key West, Florida, became a museum and a home for his cats, and it currently houses approximately fifty descendants of his cats (about half of which are polydactyl). Because of his love for these animals, Hemingway cat, is a term which has come to describe polydactyls.

Some sources state that these cats are rare in Europe because they were killed as witches' familiars, but other sources indicate that they are quite common in southern Britain.