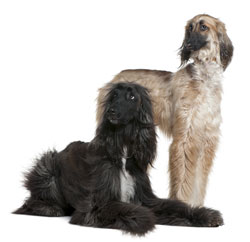 
The Afghan Hound a very old sight hound dog breed. Distinguished by its thick, fine, silky coat and its tail with a ring curl at the end, the breed acquired its unique features in the cold mountains of Afghanistan, where it was originally used to hunt wolves, foxes, and gazelles.

The Afghan Hound is high-stationed, standing 24 to 28 inches (61-71 cm) in height and weighing 45 to 60 pounds (23-28 kg). The coat may be any colour, but white markings, particularly on the head, are discouraged; many individuals have a black facial mask. However all Afghan Hounds have a white "blaze" on the chest and some are all white (called self-Masked Creams) The long, fine-textured coat requires considerable care and grooming. The long topknot and the shorter-haired saddle on the back are distinctive features of the Afghan coat.

The temperament of the Afghan Hound is aloof and dignified, but gay and clownish when playing. The breed has the reputation of being one of the least intelligent dog breeds, though this is clearly not true. The Afghan Hound has many cat-like tendencies and is not slavish in its obedience as are some other breeds. Although seldom used today for hunting in Europe and America where they are popular, Afghans are frequent participants in lure coursing events and are popular as show dogs.

The breed is thought to date back at least to the pre-Christian era. Its original native name, Tazi, betrays its connection to the very similar Tasy breed of Russia. The proximity of southern Russia and Afghanistan argue for a common origin for both breeds. Initially, Afghani people refused to sell their national dog to outsiders; the breed was not seen in Europe and America until after the turn of the 20th century. AKC and CKC did not recognise the Afghan Hound until the 1930s.

Afghans are a relatively healthy breed; major health issues are allergies, cancer, and sensitivity to anaesthesia.