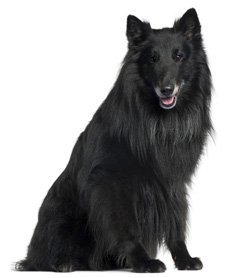 
The Belgian Shepherd (also known as the Belgian Sheepdog or Chien de Berger Belge) is a breed of medium-to-large-sized herding dog.

It originated in Belgium and is similar to other sheep herding dogs from that region, including the Dutch Shepherd Dog, the German Shepherd Dog, the Briard and others. Four types have been identified by various registries as separate breeds or varieties: Groenendael, Laekenois, Tervuren, and Malinois.

In the late 1800s a group of concerned dog fanciers under the guidance of Prof. A. Reul of the Cureghem Veterinary Medical School gathered foundation stock from the areas around Tervuren, Groenendael, Malines, and Laeken in Belgium.

Belgian Shepherd Dogs are described as highly intelligent, alert, sensitive to everything going on around them and form very strong relationship bonds. They are said to be loyal, intelligent, fun, highly trainable and well suited to family life. They should receive plenty of socializing as puppies and will benefit from regular activity and close interaction with people throughout their lifespan.

Their herding heritage gives them a comparatively high energy level, and mental as well as physical exercise is necessary to keep a Belgian happy and healthy.