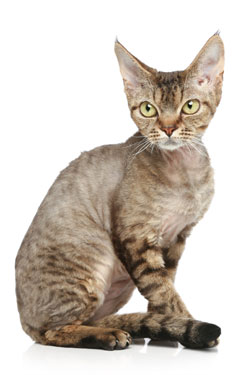 
Body: Medium length and slender, but hard and muscular, with long, slim legs

Coat: Rippled short waves in an array of colors and patterns.

History: The first know Rex was born in 1950 when a wavy-haired kitten was born into a litter from two ordinary short-coated cats in Cornwall, England. In 1960, in Devon, England, a similarly coated kitten appeared. At first it was thought that this strain could be used as an outcross for the Cornish Rex but the Devon gene was not compatible with the Cornish Rex gene. When a Cornish was mated to a Devon, only straight haired kittens were produced. The mutations were located at different positions on the chromosome. The Cornish Rex and the Devon Rex would then go their separate ways, each being bred for different body types and waviness.

Temperament: The Devon is alert, active and shows a lively interest in its surroundings. It has a good disposition, a very quiet voice and is especially suitable for apartment life. These cats make a sweet, loving pets and are a delight to show.