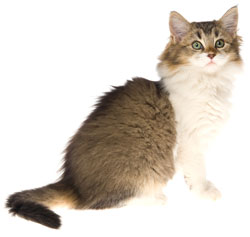 
Munchkins love to wrestle and play with their long-legged feline friends, happily unaware that there’s anything different about them. Nor do their feline companions treat them like members of the vertically challenged. Munchkins also adore dogs both big and small. One owner reported that her Munchkin likes to hide and then jump out onto her dog’s back and manages to hang on for a few seconds while the dog races round the room!

Munchkin owners report that their cats can do anything an ordinary cat can do, except leap to the top of the bookcase. (Well, that is until recently when it was reported that one Munchkins spied an Ostrich feather on the top shelf of a six foot bookcase and shimmed up there without any trouble whatsoever, although her descent was not quite so graceful!) Most of them can jump on the kitchen counter too, but some prefer to take the scenic route.

Personality: Munchkins, oblivious to the controversy surrounding them, go on being just what they are—cats—self-assured and outgoing. Munchkins are also known as “magpies,” often borrowing small, shiny objects and stash them away for later play.

As well as having sweet natures, Munchkins are affectionate, outgoing and intelligent. They love company, especially that of children with whom they seem to be especially popular. They are exceptionally playful and get along well with other cats, dogs and pets. And yes, they are amusing to watch which is a real bonus in anyone’s life. Proficient hunters, Munchkins love a good game of catnip mouse or feather teaser, but when playtime is over, they want a warm lap to snuggle into and strokes from a loving hand, like any other domestic cat.

A certain amount of controversy surrounds the Munchkin – mainly from those with preconceived ideas or who have never met one. They will even tell you that they are deformed and handicapped. Five minutes in the company of a Munchkin will convince you that this is quite untrue.

Cats with short legs are not new to the scientific world: An English Veterinary Record of 1944, contains an entry by Dr H.E.Williams-Jones who describes four generations of cats with short limbs, including an 8 1/2 year old black female, documented as having had an extremely healthy life. Her dam, great dam, and some of her progeny were similar in appearance. The cat’s movements were described as ferret-like, but other than the short legs the cats were reported to be normal in every way. Unfortunately, these cats seem to have disappeared during World War II, not surprising in that many feline bloodlines, even established ones, disappeared completely during this period of deprivation.

In 1956, Max Von Egon Thiel of Hamburg, Germany, described a cat that he had first seen in Stalingrad in 1953. The cat had unusually short legs but was in no way functionally hindered and was seen playing among its normal siblings and other young cats. At times it was noted to sit on its haunches with it’s front legs in the air, similar to the alert stance of a rabbit. Because of this behaviour, the cat was dubbed the “Stalingrad kangaroo cat” by the author. The day before he was to return to Germany, the cat was taken away by a Russian physician and there is no further information about the cat available. However, based on the description, this undoubtedly represents the same trait seen previously in Great Britain.

But the breed as we know it today began in Rayville, Louisiana in 1983. Music teacher, Sandra Hochenedel discovered two cats hiding under a pickup truck where they had been cornered by a bulldog. Hochenedel rescued the cats and took them home, later noticing two things—both were pregnant, and both had short, stubby legs. She kept Blackberry, the black cat, and gave away Blueberry, the gray. When Blackberry produced her first litter, Hochenedel gave one short-legged kitten, named Toulouse, to her friend Kay LaFrance, who lived in Monroe, Louisiana. Since LaFrance’s cats were allowed free access to the outdoors and wer