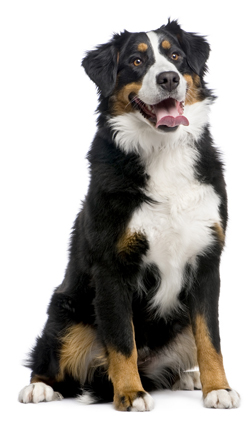 
The Bernese Mountain Dog (also called Berner Sennenhund or Bouvier Bernois) is a versatile cattle-herding or farm dog originating in the canton of Berne in Switzerland. A strikingly handsome dog of medium size, the Berner (as his friends often call him) stands 23 to 27.5 inches (58-70 cm) in height; the breed standard specifies no weight, but the usual range is 70 to 110 pounds (32-50 kg).

The breed is instantly recognised by its distinctive tricolour pattern: body, neck, legs, cranium and ears black; cheeks, stockings and eyespots rich tan, toes, chest, muzzle, tail tip and blaze between the eyes white. The pattern is rigid and varies only slightly in the amount of white. A perfectly-marked individual gives the impression of a white Swiss cross on the chest, when viewed from the front in sitting position. The eyes are an expressive dark brown.

The breed originated in Swiss farm villages where it was used as a cowherd, a draught dog to haul carts containing milk cans and farm goods, and a flock guardian. It nearly disappeared in the late 1800s but was rescued around the turn of the century by a determined Swiss cynologist, Herr Franz Schertenleib.

The Bernese coat is slightly rough in outline, but not at all harsh in texture. The undercoat is fairly dense; the coat is quite dirt and weather resistant. A good brushing every week or two is sufficient to keep it in fine shape, except when the undercoat is being shed; then daily combing is in order for the duration of the shed.

Berners are outdoor dogs at heart, though well-behaved in the house; they need activity and exercise, but do not have a great deal of endurance. They can move with amazing bursts of speed for their size when motivated; stray cats and similar intruders must beware of the Berner!

The Berner temperament is a strong point of the breed. Affectionate, loyal, faithful, stable and intelligent, Bernese Mountain Dogs make wonderful family pets. They are very trainable provided the owner is patient and consistent in training; Berners need time to think things through. Although the breed is stable in temperament, patient and loving, a Berner who has really lost his temper is a fearsome thing; given cause for attack they are swift, powerful and efficient. It is said that the breed is descended from the molossus war dogs of the Roman legions; anyone who has witnessed an angry Berner will have no trouble believing that story.

Although slow to mature, the Berner is not particularly long-lived. The Swiss say, three years a young dog, three years a good dog, and three years an old dog. Today even nine years may be slightly optimistic; certainly a ten-year-old Berner is a very old one.