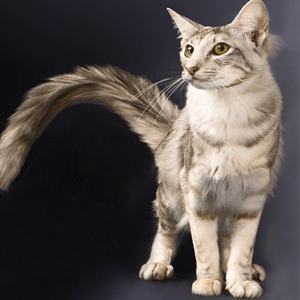 
The Oriental Longhair, is a breed of domestic cat. It was formerly known as the British Angora before being renamed in 2002 by British cat fancies in order to avoid confusion with the Turkish Angora.

Oriental Longhairs feature a long tubular, Siamese-style body (known in the cat fancy as oriental type), but with a longer coat than the short-haired Siamese. The range of possible coat colours includes everything from self-coloured (black, blue, chocolate, lilac, cinnamon, caramel, fawn, red, cream and apricot), tortoiseshell, smoke (silver undercoat), shaded or tipped, tabby or white. All Oriental Longhairs have green eyes, except for the whites, which may have green or blue eyes, or be odd-eyed (two different colored eyes).

If an Oriental Longhair is bred to an Oriental shorthair or a Siamese, the kittens will all be short-haired. However, if these kittens are reintroduced into a breeding program as adults, approximately half of their kittens will have long coats.