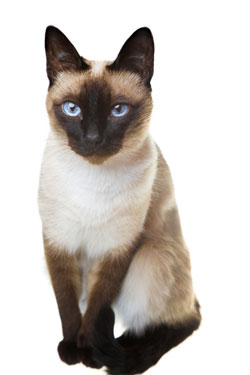 
The Siamese is one of the first distinctly recognized breeds of Oriental cat. The origins of the breed are unknown, but it is believed to be from Southeast Asia. In Thailand, where they are one of several native breeds, they are called Wichien-maat (a name meaning "moon diamond" ). In the 20th century the Siamese cat became one of the most popular breeds in Europe and North America.

The pointed cat known in the West as "Siamese", recognized for its distinctive markings, is one of several breeds of cats from Siam described and illustrated in manuscripts called "Tamra Maew" (Cat Poems), estimated to have been written from the 14th to 18th century.

Siamese are usually very affectionate and intelligent cats, renowned for their social nature. Many enjoy being with people and are sometimes described as "extroverts". Often they bond strongly to a single person. Some Siamese are extremely vocal, with a loud, low-pitched voice – known as "Meezer", from which they get one of their nicknames – that has been compared to the cries of a human baby, and persistent in demanding attention. These cats are typically active and playful, even as adults, and are often described as more dog-like in behavior than other cats.

They are sometimes less active at night than most cats, possibly because their blue eyes lack a tapetum lucidum, a structure which amplifies dim light in the eyes of other cats. The mutation in the tyrosinase also results in abnormal neurological connections between the eye and the brain. Unlike many other blue-eyed white cats, Siamese cats do not have reduced hearing ability.