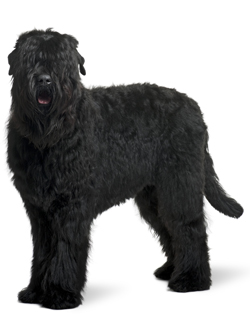 
The Black Russian Terrier, abbreviated as BRT, or Stalin's dog (Sobaka Stalina) is a breed of dog, developed to serve as guard dog and police dog. It is rare outside the countries of the former Soviet Union but beginning to be formally recognised elsewhere: in July 2004, for instance, it became one of the AKC's recognised breeds.

Despite its name, the Black Russian Terrier is not a true terrier: it is believed that about twenty breeds were used in its development, including the Airedale, the Giant Schnauzer, the Rottweiler, the Newfoundland, the Caucasian Ovtcharka and the now extinct Moscow Water Dog.