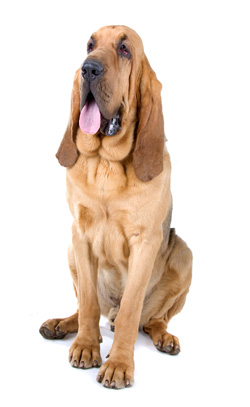 
A Bloodhound is a large dog. It is a scent hound famed for its ability to follow a scent many days old, over vast distances.

Although all dogs can follow scents on the ground, in the air, and in water, the Bloodhound's physical characteristics make it a legend in its ability to follow a scent. Odours are picked up and identified by scent receptors in a dog's nasal chambers; the larger the chambers, the better chance the dog has of identifying even the smallest and least number of particles that provide a scent. The Bloodhound's nasal chambers are larger than most other breeds. In addition, it is believed that pendulous ears and moist, pendulous lips help to trap scent particles, and the Bloodhound has those in abundance. This dog is often used as a police dog to track missing people, fleeing suspects, or escaped prisoners.

The ability to follow a scent has always been valued and superb scent trackers were developed separately in lowland Europe at the St. Hubert Monastery and in Britain. This dog has been known as a breed since at least the Middle Ages. Its excellent tracking skills were a target as it was used in the development--intentional or unintentional--of other fine tracking breeds such as the American Coonhound, Swiss Jura Hound, Bavarian Mountain Hound, and many others.

Bloodhounds now come in black and tan, liver and tan, or red. In the Middle Ages, they also occurred in other solid colours, including white (known as the Talbot Hound), but these no longer occur. The colours appear in other breeds descended from the early Bloodhounds, though.

This breed is a mellow, cheerful, relaxed dog who is nonetheless tireless in slowly and steadily following a scent. Its laid-back attitude makes it somewhat difficult to obedience train.