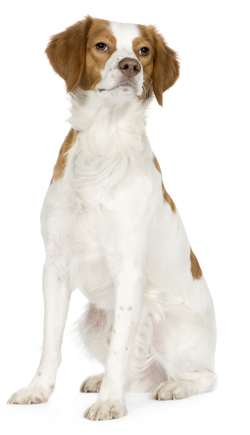 
The Brittany is a member of the Gundog group; they are the smallest of the hunter-pointer-retriever breeds. They were originally and still are used for rough shooting, but are truly multi-purpose gundogs - used in field trials, falconry, in the show ring and as pets.

The Brittany is an active, squarely built, medium sized dog having an unusual, but typical clipped gait. Their coat is fairly dense with a small amount of feathering – making this low maintenance. Colouring is orange and white, liver and white, black and white, tricolour, or roan of any of these colours.

Bitches should measure between 47-50cm with a tolerance of 1cm, and dogs measuring between 48-51cm (with the same tolerance). Their weight should be between 15 - 18kgs according to build and size.

Approximately 15 years old. The average age is in between 12-16 years.

The Brittany is a very active breed, who is highly intelligent, biddable and keen to please. They are also affectionate, kind, and love to be part of the family. They are generally good with children and other animals provided they are properly socialised from an early age. However, they are also passionate about hunting and are therefore not suitable for novice pet owners who are not prepared to give them the exercise they need, or opportunities to use their brain or energy, (as their nose will take them miles away if not trained or they are likely to use their brain to get into mischief, e.g. barking, destructive or unwanted behaviour out of sheer boredom). Therefore they need both mental and physical stimulation – such as working, obedience or agility to keep their mind occupied.

This breed is very active and needs plenty of exercise, preferably 1 – 2 hours per day both on and off of the lead, they possess huge reserves of stamina and it is recommended that owners regularly involve them in a 'working' activity such as shooting, field trials, falconry or agility.

With a short / medium coat, shedding of coat is not extensive, and therefore grooming does not take long; a regular brush and perhaps occasional trim is generally all that's needed, you should also regularly check their ears for any dirt or debris.

The Brittany originates from the centre of Brittany in Callac (France). It was originally liver & white or black & white and was short and fairly small. In 1865, British Lords used to come over to France shooting Partridge and Woodcock with their dogs, which they left behind with the local farmers because of quarantine. These dogs were mainly Setters, but also Pointers and were therefore crossed with the local spaniels. These matings produced a hybrid of all colours (the Brittany). And shooting men noticed an improvement in scenting ability with better working style. In the 1900s, small English Setters were deliberately mated to the Brittany which is why there were taller, “setterised” examples of the breed - up to 56cm. The breed stabilised from 1930, and breeders worked towards establishing the smaller, “cob” type. So the first short-tailed Brittany standard was established in 1907-1908. The Brittany made its way back across the Channel and also across the Atlantic where it is now one of the most popular breeds for bird hunting. The Brittany is today the most popular gundog in its native France.

The Brittany is a highly intelligent breed. They learn quickly, but their training needs to be fairly firm and consistent – or they will take advantage of the situation. It is important to give the Brittany a good basic training