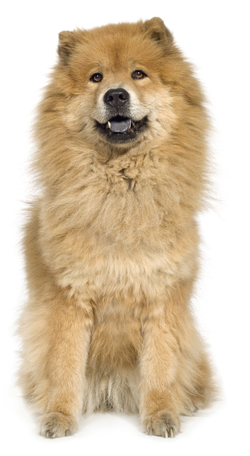 
Chow Chow, or Chow, is a breed of dog originating from China, where it is referred to as Songshi Quan (Pinyin: songshi quan), which literally means "puffy-lion dog". The breed has also been called the Tang Quan, "Dog of the Tang Empire".

It is an unusual and unique type of dog, thought to be one of the oldest recognisable breeds. A bas-relief from 150 BC (during the Han Dynasty) includes a hunting dog similar in appearance to the Chow Chow. Recent DNA analysis confirms that this is one of the oldest breeds of dog. Chow Chows were originally bred as a general-purpose working dog for herding, hunting, and guarding. The breed has also been used to pull sleds and for meat and fur. While now commonly kept as a companion dog, the Chow Chow has a reputation for being a wilful and independent breed that is sometimes difficult to train.

The Chow Chow is a stocky, well-built dog with broad skull and small, rounded ears. The breed has a very dense coat that is either smooth or rough. The fur is particularly thick around the neck, giving the distinctive ruff or mane. The coat may be one of several colours including reddish-brown (described as "red"), black, blue, cinnamon, cream, or white. Not all these colour varieties are recognised as valid in all countries. Individuals with patchy or part coloured coats are considered to be outside the breed standard. Chow Chows are unusual in having a blue-black tongue and very straight hind legs that result in a rather stilted gait.

Like many heavy-set dogs, Chow Chows may be prone to hip dysplasia. They may also be susceptible to entropion, an eye irritation caused by an eyelid abnormality.