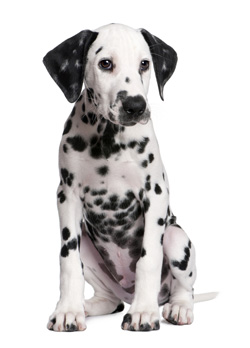 
A Dalmatian is a breed of dog, noted for its white coat with (usually) black spots. "Liver" (brown) and "lemon" (yellow) types also exist, though they are much rarer.

In the US Dalmatians are often known (and portrayed, for example in children's books), as firehouse dogs. This appears to be rooted in the popular use of the Dalmatian as a carriage dog, that is, a dog whose role was to run along, beside, and sometimes even under horse-drawn carriages (therefore also known as Spotted Coach-dog). Carriage dogs were useful for clearing the way in front of the carriage, possibly for helping to control the horses when at a full run (such as for horse-drawn fire engines), and undoubtedly because they were attractive and eye-catching. This use might have transferred to horse-drawn fire engines although it is unclear why this link is made in the USA and not other countries.

However, their origins are as a generalised working dog. They were used for so many tasks herding sheep, hunting in a pack, and working as a retriever and as a bird dog--that they were never specialised into one particular area.

Dalmatians are famed for their loyalty and good memories and their kindly natures. They also have a reputation for greed.

The breed experienced a massive surge in popularity caused by the 1956 novel The Hundred and One Dalmatians by Dodie Smith, and especially the Disney films based on the book. At the time of the 1996 live action film 101 Dalmatians concern was expressed that people, having seen the film, would buy the dogs without thinking through the responsibilities of ownership: for example, Dalmatians, having been bred to run with horses, need plenty of exercise. It is not clear whether these concerns turned out to be correct, although there is evidence that problems occurred in 1961 when the first animated film, One Hundred and One Dalmatians, was released.

The breed was named in the 18th century after Dalmatia, a region of modern Croatia that was once part of Austria, although it is believed to have existed for possibly centuries before it was so named. 4000-year-old Greek art displays dogs that appear similar to the modern Dalmatian. There is some evidence that it originated even before that in India.

Some have a tendency towards deafness, as is the case with many mostly white or all-white dogs. Information from Dalmatian clubs can usually address this issue for new owners. Some male Dalmatians are aggressive towards other male dogs. They can develop urate stones in their urinary system, this is the only dog breed that does so.