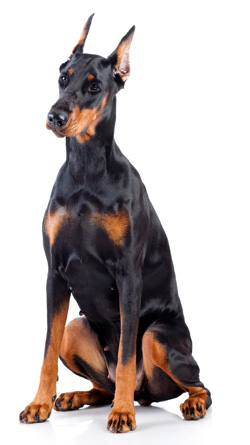 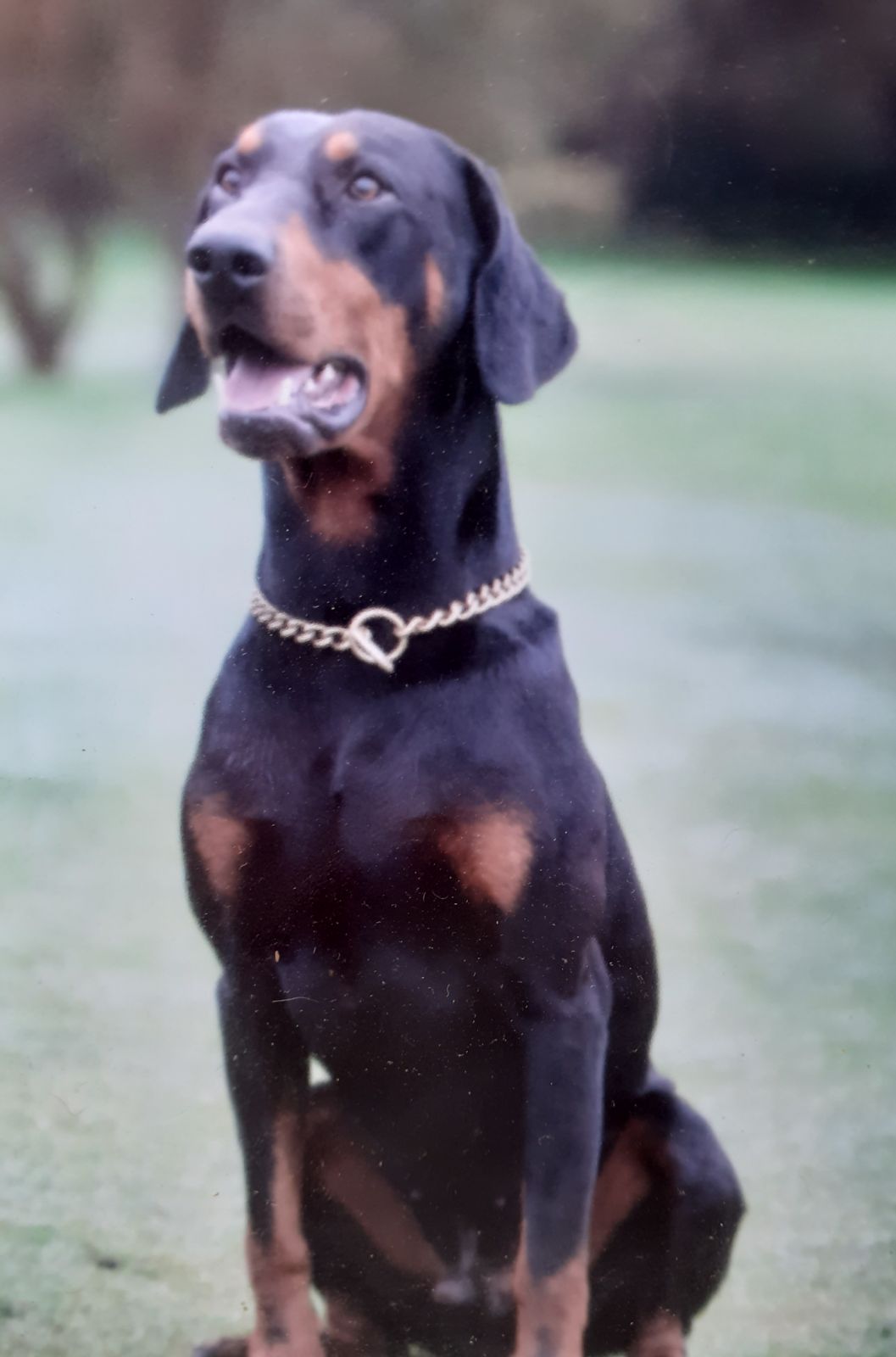 
The Dobermann or Doberman Pinscher (also, more colloquially, Dobie) is a breed of domestic dog. Dobermanns are commonly used as guard dogs, watch dogs, or police dogs, and have a reputation as being a dog that is incredibly loyal to its familial duties and that is vicious if crossed. Because of the Dobermanns typical use as a guard dog, and its often stereotyped role as such in movies, many people are afraid of Dobermanns; most do not understand that Dobermanns are, in general, a loving and intelligent breed that rarely attacks people except when it feels that it or its property or family are in danger.

A female Dobermanns shoulder height is about 24 inches (61 cm) and weight is about 75 to 80 pounds 34 to 36 kg), whereas the male stands about 26 or 27 inches (66 to 68 cm) at the shoulder and weighs around 90 pounds (41 kg). Most people picture a Dobermanns colour as the typical black with brown markings. However, the existence of two different colour genes in Dobermanns provides four different phenotypes in Dobermann colour. The traditional colour, produced when both genes are dominant, is commonly referred to as black, while the most common variation, due to one gene's being recessive, produces what is called a red Dobermann, which is primarily reddish-brown with tan markings. The other gene's being recessive, while the first one remains dominant, produces the blue (grey) Dobermann, whereas the least likely combination of both colour genes' being recessive produces fawn, which is a light tan colour.

Recently, a fifth colour of Dobermann, dubbed the white Dobermann, has been widely bred and marketed to the public. Dobermanns of this colour possess a genetic mutation, which prevents its pigment proteins from being manufactured, regardless of the genotypes of either of the two colour genes; that is, it is an albino. Though many potential Dobermann owners find the colour beautiful, albino Dobermanns, like albinos of other species, face increased risk of cancer and other diseases and should avoid sun exposure as much as possible. The popularity of the white Dobermann has died down dramatically as the risks have become known, with many people even calling for an end to the breeding and marketing of the white Dobermann, because they perceive it as cruelty to the animal. Some countries have made the purposeful breeding of the white Dobermann illegal, though, as happens with human beings, random genetic mutation still leads to Dobermann albinism on a completely arbitrary, but very rare, basis.

What may come as a surprise to people who are used to seeing Dobermann tails that are just a couple of inches long, is that the Dobermann is actually born with a tail that is longer than that of most breeds of dog. Typically, a Doberman Pinscher undergoes docking, a procedure in which the majority of its tail is cut off within days after its birth. The rationale for this is that it is the "look" that the dog is supposed to have, since it was the way Louis Dobermann originally envisioned the dog. It also gives the dog an appearance of ferocity and toughness. Aside from these more vain reasons of putting the animals through a procedure that many view as inhumane, one practical reason for docking the tail is that it removes what would be a convenient "handle" for a criminal or attacker to grab when the Dobermann is performing its guard or police work. Regardless of people's beliefs on this matter, few Dobermann purchasers have a choice on the length of their Dobermann's tail; docking must be done soon after the dog's birth, which means that the breeder nearly always makes the decision, before their dogs are even put on the market.

This is not true, however, of Dobermann ear cropping, which is typically done up to six months or a year after the Dobermann's birth, and is therefore usually left up to the discretion of the dog owner. In larger and larger numbers, Dobermann owners are opting not to have their pets ears cropped, in a procedure that is believed to be extremely painful for the animal.