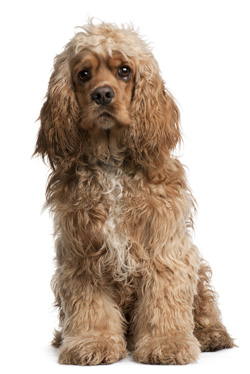 
The American Cocker Spaniel evolved in the United States from spaniels imported from Great Britain. The name cocker comes from the fact that the breed originally hunted woodcock. By the 1930s it had become so different from its English ancestors that it was given separate breed status. American Cockers weigh 24 to 28 pounds (11 to 12.75 kg) and stand 15 inches (38 cm) maximum height.

They come in three major colour varieties: black, ASCOB (Any Solid Colour Other than Black) and parti-coloured. The other solid colours are chocolate, red, buff, cream, and sable. The domed head, large dark expressive eyes, short deep muzzle and abrupt stop are characteristic breed points. The coat is flowing, long, silky and abundant. The long, luxuriantly feathered ears are a striking breed feature.

Cockers have been a highly popular American breed since the 1940s, occupying the top position in number of American Kennel Club registrations in many years. This may be due to their temperament, which is typically happy, trusting and intelligent. Originally a gun dog, the Cocker now fulfils the position of family pet or show dog most often and is rarely seen hunting. He is a faithful and responsible children's companion.