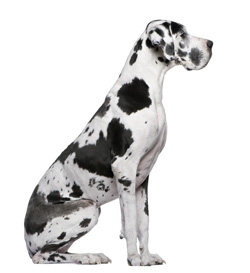 
The Great Dane is a breed of dog known for its large size (giant) and gentle personality. The breed is commonly referred to as the "Gentle Giant". Typically they are smart, strong dogs who are protective and loyal to their owners. They take to training well and are fairly low maintenance compared to many other breeds.

There are six show-acceptable coat colours for Great Danes;

Blue - Deep grey with a bluish tinge. Reminiscent of Weimeraners.

Harlequin - Torn black patches on white. Great Danes are the only dog breed that show this particular coat colour pattern. (Dalmatians have round black spots)

Mantle - Black coat and mask on white. Looks like the markings on Boston Terriers.

Some colours that crop up from time to time but are not acceptable in the show ring, and are not pursued by breeders, are White, Fawnequin, Merle, Merlequin, Fawn Mantle, and others. These are sometimes advertised as "rare" colours to unsuspecting buyers.

Typically if a Great Dane lacks colour (not white) near their eyes or ears then the organ does not develop and they will be either blind or deaf.

A problem common to the breed is in the hips (hip dysplasia). Typically an x-ray of the parents can certify whether their hips are healthy and whether they are likely to have healthy pups. As with many other deep-chested breeds, Great Danes are also very prone to bloat.

Originally bred for hunting large game (deer and so on), these dogs are now kept as pets and for show. Great Danes, like most giant dogs, have a fairly slow metabolism. This results in less energy and food consumption than small breeds (based on food consumption per pound of dog.)