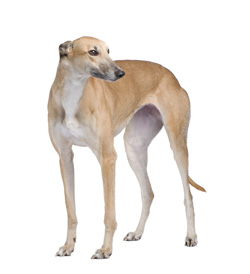 
The greyhound is a dog in the sighthound family. It is an ancient breed and its origins can be traced back to ancient Egypt where a bas-relief depicting a greyhound was found in a tomb built in 4000 BC. At first, greyhounds were used mainly for hunting in the open, but later on were specialised in dog racing. It is believed that they were introduced to England in the 5th and 6th centuries BC by the Celts during their invasions.

Greyhounds are the fastest running of all dogs, with their long legs and lanky frames. They are commonly known for their use on the racetrack, where they can reach speeds up to 45 mph (72 km/h). The conditions under which racing greyhounds are kept are considered by some people to be inhumane. In the late 20th century many greyhound adoption groups began taking greyhounds from the racetracks when they could not compete and placing them in adoptive homes. Before this, most retired greyhounds were killed, some still are.

Some greyhounds never race either because they are too slow, have physical defects or do not have the required temperament. Most finish racing between two and three years of age.

Although Greyhounds are extremely fast dogs, they are not high energy dogs. They are sprinters and do not require much exercise once they leave the track. They are quiet, gentle animals. Greyhounds are often referred to as "Forty-five mile an hour couch potatoes."

Greyhounds make good pets because of their mild and affectionate character. They can get along well with children and family pets, including cats. Greyhounds are generally very loyal, tractable dogs with developed intellects. Their talents include sighting and hunting. They do not have undercoats and are considered "hypoallergenic."

Male dogs are usually 28-30 inches (71-76 cm) tall and their weight is about 65-70 pounds (29-32 kg). Female greyhounds are a bit smaller - they are 27-28 inches (68-71 cm) tall and weigh about 60-65 pounds (27-29 kg). Their coat is very short and easy for combing. It can be white, brindle, fawn, fallow, black, grey, white, red, and blue in colour and these colours can also appear with white in the coat as well. Greyhounds should be shampooed 'only' when necessary. If you would like to add gleam to the coat, rub it with a chamois cloth occasionally.

It is wise to keep them on a leash because their hunting background has instilled a strong desire to chase things. Greyhounds can live in an urban setting but require moderate exercise on a regular basis. They enjoy walking and running outside.

Smaller breeds that are similar in appearance are the Whippet and the Italian Greyhound.